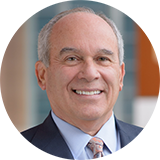 Dennis Black serves as senior advisor to the Chairman. He also serves on the firm’s board of directors and the Investment Committee for Institutional Real Estate, Direct Investments. He focuses on corporate governance, firm structure and ownership. He previously served as general counsel of Mesirow.

Dennis has more than 50 years of experience advising businesses and business owners on corporate, tax, securities, regulatory and financial issues. Prior to joining Mesirow in 2009, he was a principal at Goldberg Kohn, of which he was a founding member. In that role, he advised business owners and boards of directors and handled all aspects of acquisitions and sales, as well as corporate finance transactions from initial structuring through negotiations, critical documentation and supervision of closings. In addition, Dennis served as Mesirow outside corporate counsel and as a member of the firm’s Executive Committee for many years. He was a director of Meritas, an affiliation of nearly 6,000 attorneys from around the world, until 2005. He served as president of The Standard Club in Chicago from 2006 to 2008 and has also been a director of numerous other charitable, civic and professional organizations.

Dennis served as a law clerk to the Honorable Walter J. Cummings, United States Seventh Circuit Court of Appeals, from 1968 to 1969. He is admitted to practice in Illinois and has been a frequent speaker and author on a variety of corporate and related legal matters.