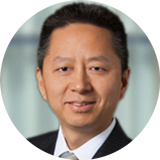 Feng Zhao is a Managing Director for Mesirow Analytic Fixed Income, where he is responsible for the team’s proprietary quantitative model and its development efforts.

Feng has 24 years of industry experience and has been with Mesirow since 2020, when Chicago Equity Partners (CEP) Fixed Income team joined the firm. At CEP, he held a similar role and, prior to joining CEP in 2014, held positions at Stark Investments and JPMorgan Chase.

Feng earned a Bachelor’s degree in both science and English from the University of Science and Technology of China. He earned a Master’s degree in mathematics from Eastern Illinois University, and an MBA from New York University. In addition, he earned a Ph.D. in statistics from Florida State University. He holds the  Chartered Financial Analyst® designation and is a member of the CFA Institute. He also holds the Financial Risk Manager (FRM) certification.