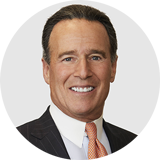 Larry D. Richman serves on the Mesirow Board of Directors, contributing to the development and the strategic direction of the firm.

Larry is the past Chair, U.S. Region, CIBC Bank USA, a role in which he focused on developing client relationships, fostering community engagement, and mentoring team members. He previously served as Senior Executive Vice President, Group Head, CIBC U.S. Region, and President and Chief Executive Officer, CIBC Bank USA. He joined CIBC following its June 2017 acquisition of The PrivateBank, where he served as President and CEO. He joined The PrivateBank in November 2007 to drive its strategic transformation into a leading middle-market commercial bank, growing assets from $4 billion in 2007 to more than $20 billion in 2017.

Larry is on the Dean’s Advisory Council at Indiana University’s Kelley School of Business, where he earned his MBA. He was inducted into the Academy of Alumni Fellows for the Kelley School of Business in 2006. He is a past Trustee of Bradley University in Peoria, Illinois, where he earned his bachelor’s degree. Richman was inducted into Bradley’s Centurion Society for distinguished alumni in 2017. He also holds an advanced certificate from Stanford University in credit and financial management and is a Lifetime Advisory Board member at Northwestern University’s Kellogg School of Management.

Larry is active in multiple civic, philanthropic, and governance activities. He serves as Chair of the board for Northwestern Memorial Hospital and is a board member for the Big Shoulders Fund, Museum of Science and Industry, Western Golf Association, and The Executives’ Club of Chicago. He is a member of the Commercial Club of Chicago and its Civic Committee, and the Bankers Club of Chicago.  He is currently President of The Chicago Club and is a member of the Economic Club of Chicago and a past member of its Board of Directors. He is also a past board member of World Business Chicago, an organization created by Mayor Rahm Emanuel to promote the benefits of doing business in the Chicago area to business peers worldwide.