The invasion of Ukraine by the Russian Federation on February 24, 2022 has resulted in the most significant humanitarian crisis in Europe in decades and created the greatest threat to modern Europe and international order since World War II. Our thoughts remain with all those around the world who are affected by this ongoing war.

As global markets struggle to price a descent from conventional western world order to eastern European turmoil, the impact has varied widely. Some markets have handled the strain in an orderly manner. Others have responded erratically.

US Capital Markets have struggled to reset risk-adjusted values among the geopolitical and economic crosscurrents of 1Q2022. Commodity prices and defense budgets are soaring in the aftermath of the Russian invasion of Ukraine. Energy markets have responded wildly, and the world is re-calibrating risk. But, given an inversion of the yield curve in the last week of March, no small matter, markets  have been swayed by inflation signals, stagflation fears and Federal Reserve  Board lassitude.

In addition, as global powers struggle to realign and respond to this crisis, western defense planners are gaining a clearer, more prescient understanding of the threat of Chinese hegemonic ambitions in the Pacific Basin and the developing world (commodity resources being the target).

In this issue of the Capital Markets Brief we will try to cut through much of the noise generated in this historic and volatile quarter. We will focus on data and demonstrated behavior to provide some clarity about what underlies market behavior in this violent and often opaque world, and how markets assess and discount present and future risk as they navigate this turbulence. 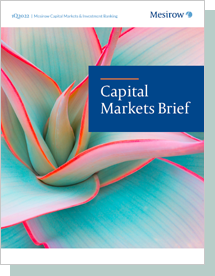