In the most unusual of years, 2020 will be remembered in FX for the market implications related to COVID-19, Brexit, and the US election. A culmination of factors led to significant US dollar weakness, calling into question the dominance of the US dollar and its status as the world’s reserve currency. As the US dollar continues to weaken into the New Year, the rising adoption of digital currencies in investor portfolios has gained momentum.

US dollar weakness took center stage in 2020 as markets reacted to the global spread of the pandemic. In the early stages of COVID-19, investors rushed to the US dollar and other safe-haven currencies. Soon after, the US dollar index (DXY) experienced a peak-to-trough drawdown of over 12.5% from mid-March through the end of the year as risk assets climbed significantly over the same time period.
It is notable that this dollar weakness occurred in the face of great uncertainty, marked by the raging global pandemic, California wildfires, a record-breaking Atlantic hurricane season, a tense US election, and an erratic foreign policy stance by the US. Various factors contributed to the falling dollar and stronger markets during this time of adversity. As fear concerning the global economy emerged, central banks played a pivotal role in buoying the markets by injecting massive amounts of liquidity and monetary stimulus into the marketplace, supporting an exceptionally fast rebound in capital markets and more dollar selling. While the global economy remains dollar-dependent, Trump’s economic nationalism reduced the US role in global trade and revealed vulnerabilities in the US economy, resulting in a less attractive safe-haven alternative than in the past. As the year moved forward, the markets grew more confident as the US election outcome became more certain, vaccine advances were progressing, Brexit negotiations were headed toward agreement, and additional fiscal stimulus packages were passed.

Source: Bloomberg. January 2020 to December 2020. Past performance is not necessarily indicative of future results. Actual results may materially differ. 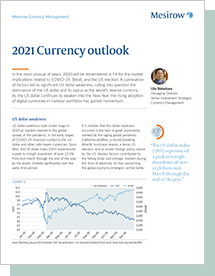