Inflation, interest rates and your pocketbook

At the onset of the pandemic, the US Government and the Federal Reserve took aggressive action to help support the US economy as it went into a self-imposed shutdown. With entire sectors of the economy in free fall and millions of jobs lost in a matter of weeks, Congress passed the Cares Act which provided the public with stimulus checks, and the federal funds rate was lowered to nearly zero. The goal of implementing these policies was to flood the economy with dollars to help stave off even more instability and unemployment until the virus could be contained.

Nearly two years since the pandemic became widespread across the United States, we now have vaccines with boosters and a nearly fully reopened economy. The combination of reopening markets and loose monetary and fiscal policy has put the US economy back on track to a recovery, doing so at a pace of growth not seen since the 1980s.

While a rapidly expanding economy and reduced unemployment are both positive outcomes of these policies, there are inherent risks in providing too much support. Coupled with supply chain disruptions, the global economy has begin to show persistently higher levels of inflation. This has forced the Federal Reserve to accelerate expectations for potential interest rate increases. While we can’t predict exactly when the Federal Reserve will raise rates, we feel it’s worth discussing how such an environment could affect your personal finances.

The impact of rising inflation

Inflation is a measure of the rate of increase of prices for goods and services in an economy, which has popularly been measured by the Consumer Price Index “CPI.” In any growing economy, there is a natural and healthy level of inflation. The primary effect of increased levels of inflation to consumers is an erosion of purchasing power, with the value of a dollar being worth less than before. Savings, wages, and fixed income streams can all become devalued which can lead to a desire to move up scheduled expenses in order to get ahead of upcoming inflation. This adds fuel to the inflation cycle, progressively ratcheting it up to unhealthy levels.

Since 1913, when the Government started tracking inflation, the US has averaged 3.10% growth a year through 2020.¹ However, there have been periods when inflation has deviated from this average, such as the late 1970s to early 1980s when inflation reached 14.5%.¹ This year, as vaccines were rolled out and government restrictions were quickly lifted, we have seen drastically higher levels of inflation caused by supply chain issues and a labor shortage. Currently, the Labor Department reported retail inflation for November of 6.8% year-over-year.² This number is well above the year-over-year average of 1.7% recorded since 2010 and the highest number seen in 39 years.³ The chart below shows how inflation has moved since January 1, 2010. 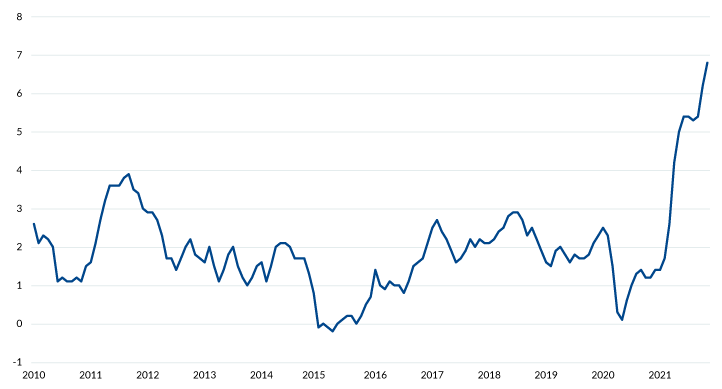 To keep inflation in check, the Federal Reserve has historically relied on a policy of increasing borrowing rates to help cool down levels of spending. Inflation will be an important metric to follow, as further increases in inflation may increase the Fed’s pressure to raise interest rates at an accelerated pace.

The impact of rising interest rates

When the Federal Reserve increases rates the most notable effect takes place in lending markets. Adjustable rate loans such as credit cards, Adjustable Rate Mortgages, and Home Equity Lines of Credit could be subject to increasing rates, and thus increased monthly payments for the loan owner. To mitigate this issue, the loan owner may consider paying off existing lines of credit at lower rates or refinancing to a lower fixed rate. Existing fixed rate loans will be sheltered from increasing rates, but future loans would be subject to higher carrying costs potentially providing an impetus to apply for a loan sooner than planned.

The flip side to increased borrowing costs is an increase in bank savings rates. Currently, savings accounts pay next to nothing on your cash holdings. If interest rates were to increase, banks would begin paying more to keep your funds in an account. Money market accounts, High Yield savings, and Certificates of Deposit would all provide higher returns than in the recent past. This added incentive may increase your willingness to keep money in cash reserve.

Be prepared for what’s next

These are just a few of the aftershocks that would be produced by higher inflation and subsequent Federal Reserve action to counter it. It’s important to note that all economies have myriad elements and unknowns that can alter its trajectory and attempting to time or predict moves in interest rates cannot be done with any level of certainty. Furthermore, countering rising inflation with interest rate hikes isn’t a sure thing as the Federal Reserve’s approach will depend on the context of the current environment. In the case of the present situation, the Federal Reserve has retreated on their description on inflation as “transitory” and is seeing increased pressures to wind down their stimulus measures.  However, economists still disagree how long these higher inflation rates will last and if raising rates would be a premature decision that would hurt the economy.  Plainly put, until the Fed announces it’s making a change, talk of rate hikes is merely speculation.

We believe the best way to prepare for inflation and rising interest rates is by consulting your Mesirow advisor and reviewing your long-term goals and financial plan. Your advisor will be able to help guide you through decisions relating to refinancing, funding loan payoffs, utilizing savings accounts and more as it pertains to your unique situation.

Take the next step

We believe the best way to prepare for inflation and or rising interest rates is by consulting your Mesirow advisor and reviewing your long-term goals and financial plan. Your advisor will be able to help guide you through decisions relating to refinancing, funding loan payoffs, utilizing savings accounts and more as it pertains to your unique situation.

Connect with an advisor

Mesirow does not provide legal or tax advice. Past performance is not indicative of future results. The views expressed above are as of the date given, may change as market or other conditions change, and may differ from views express by other Mesirow associates. This is not a solicitation to buy or sell the securities mentioned. Do not use this information as the sole basis for investment decisions, it is not intended as advice designed to meet the particular needs of an individual investor. Information herein has been obtained from sources which Mesirow believes to be reliable, we do not guarantee its accuracy and such information may be incomplete and/or condensed. All opinions and estimates included herein are subject to change without notice. This communication may contain privileged and/or confidential information. It is intended solely for the use of the addressee. If you are not the intended recipient, you are strictly prohibited from disclosing, copying, distributing or using any of the information. If you receive this communication in error, please contact the sender immediately and destroy the material in its entirety, whether electronic or hard copy. This material is for informational purposes only and is not intended as an offer or solicitation with respect to the purchase or sale of any security.