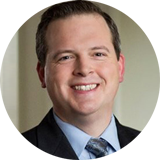 John Healey is a Managing Director in Mesirow Public Finance. He focuses on providing custom finance solutions and debt offerings for municipalities and other governmental entities and expanding the firm’s presence in the New England market.

Prior to joining Mesirow in 2017, John was Vice President of William Blair’s Municipal Securities group, where he was responsible for serving government clients in the Connecticut market. Before that, he served as Chief of Staff for the City of New Britain under Mayor Erin E. Stewart, playing a critical role in the City’s financial turnaround.

John is a member of the Connecticut Bar and the Government Finance Officers Association of Connecticut, as well as numerous charitable and civic boards and organizations.

John earned a Bachelor of Arts from Boston College and a Juris Doctorate from the University of Connecticut College of Law. He holds FINRA Series 7, 52, 53 and 63 licenses.