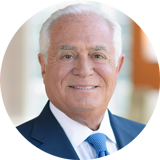 Richard S. Price serves as Executive Chairman of Mesirow, an independent, employee-owned financial services firm founded in 1937. In this role, Richard is actively involved in organizational strategy, civic and community engagement, and the firm’s focus on diversity, equity and inclusion.

Over the course of 50 years with Mesirow, Richard has been a key driver of the firm’s vision and success, serving in prior years as Chairman and CEO, President and Chief Operating Officer and President of Insurance Services. He has been a member of the Mesirow Board of Directors since its inception in 1987. Richard joined the organization in 1972 to establish the firm’s insurance services business, which was sold to Alliant Insurance Services in July 2016.

Richard sits on the board of World Business Chicago and The Executives’ Club of Chicago. He is a member of The Economic Club of Chicago and The Civic Committee of The Commercial Club of Chicago. He was appointed to the United States Holocaust Memorial Museum Council by President Barack Obama and to the Cook County Economic Advisory Council by Cook County Board President Toni Preckwinkle. Richard also serves on the board of directors of Northwestern Memorial Foundation, Navy Pier, Metropolitan Family Services and the Big Shoulders Fund. He is the chair of The Nora Project Leadership Council and a member of the board of regents for Mercy Home for Boys and Girls.

"To me, the most special thing about Mesirow is our entrepreneurial culture."