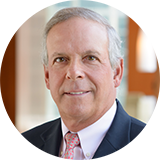 Jeff has more than 35 years of Investment Banking experience and has successfully originated and/or executed over 250 domestic and cross-border transactions aggregating more than $100 billion. He has advised boards of directors, CEOs and senior management teams on a broad array of assignments and led teams in mergers and acquisitions, divestitures, IPOs, restructurings, recapitalizations, leveraged transactions and equity and debt financings. Prior to joining Mesirow in 2001, he was a Founding Partner of GGW Management Partners, LLC and a Managing Director of Lazard Frères & Co., LLC, opening the company’s Chicago office in 1988. He also served as Vice President in Salomon Brothers’ Chicago Banking Group from 1981 to 1988, where he focused on mergers, acquisitions and corporate finance.

Jeff is dedicated to serving his community as an active fundraiser for the Cystic Fibrosis Foundation. He is also a member of the Development Council of B.U.I.L.D., Inc. (Broader Urban Involvement and Leadership Development), a not-for-profit organization which helps at-risk youth to realize their potential and contribute to the stability, safety and well-being of our communities.

Jeff has been a consistent source of thought leadership in the industry. He has authored numerous articles and been featured in various business publications such as USA Today, Forbes, Bloomberg and Reuters, among others.